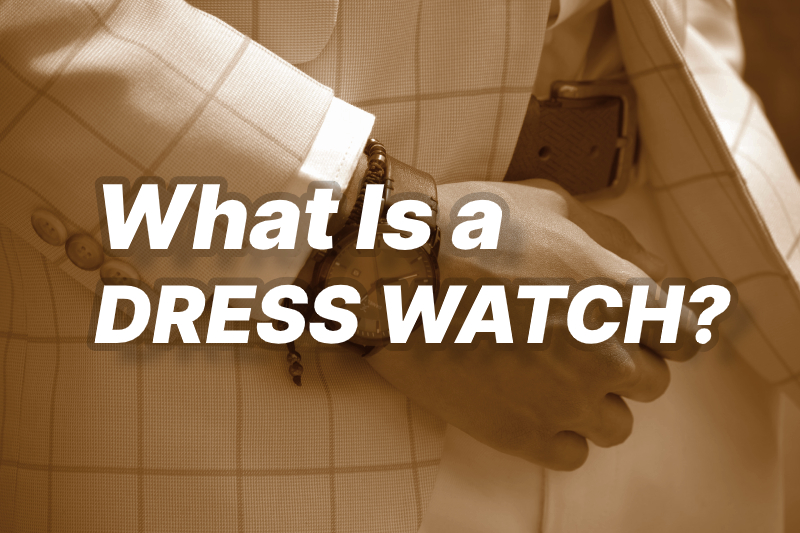 A dress watch is a wristwatch that not only acts as a timer, but also as a piece of jewelry that is a natural part of the dress code.

Dress code can vary depending on context and therefore it is not uncommon for owners of dress watches to own several watches, so one can change depending on the choice of attire for the mood of the day or perhaps a special event.

But let’s dig a little deeper into the issue.

What Is a Dress Watch?

There is no absolute truth about what a dress watch is, but let’s still try to pinpoint a slightly more precise answer.

To be able to do that, let’s first look at what a dress watch is not.

1. A dress watch is not a smartwatch!

Wait a minute… why not?

Well, an important part of the answer to that question is that smartwatches are designed by programmers and engineers who are focused on functionality rather than appearance.

It may not in itself serve as a sufficient answer, but it does mean that all efforts to optimize the watch during the development process have been concentrated on the functional part rather than on the look.

If we take a brief look at Apple and their Apple Watch, which by many is considered to be the best smartwatch on the market in 2020, there is no doubt that Apple is extremely focused on the design, look and feel of their products, and that of course, also applies to the Apple Watch.

But the truth is that the 5th generation of the Apple Watch has pretty much retained the same physical shape and appearance since the launch of the 1st generation in 2015.

Yes, you can make an Apple Watch more personal today by choosing a watch case in titanium, ceramic, or stainless steel as an alternative to the traditional aluminum.

It is also possible to buy an alternative Apple Watch strap in addition to the one included as standard, but basically an Apple Watch is an Apple Watch… It has that certain look and it has been like that since the beginning.

That being said, an Apple Watch sort of blends fine with virtually any outfit, it just doesn’t have the ability to serve as an eyecatcher, to provide that ‘extra’ that makes you turn around, look a second time and wonder.

In short, a smartwatch is first and foremost a multi-functional apparatus with the capability of telling time.

With a dress watch it’s basically opposite.

The Junghans Max Bill Automatic Bauhaus is a good example.

Compared to the Apple Watch, it’s not very precise since it’s an automatic, it doesn’t do much other than telling time (and the date) and it’s only water resistant to 3 bar.

Junghans watches are quality watches that often contain quite sophisticated technology, but typically hidden behind a minimalist exterior.

They have the emphasis on appearance rather than on functionality and it is often a watch buyers choose with dress code in mind.

2. Dress watches are not a category or a particular type of watches!

Well, at least not at Great Wristwatches.

Of course, in a sense it actually is a unique category of watches, but the point is that dress watches can be very different and vary on almost every detail.

Some are solar powered, some are quartz regulated and some are exclusively mechanically driven.

Crystal, crown, complications, strap type, materials, colors, dimensions, weight, price and the list is endless. All these parameters and many more can differ from one dress watch to another.

So What Do All Dress Watches Have in Common?

3. A dress watch is a piece of jewelry!

Seeing a wristwatch as a piece of jewelry rather than a timer creates some completely new criteria for how to perceive a watch. Materials, appearance and design become parameters that play a very big role, and functionality and features step into the background.

In short, it is the interplay between watch and dress that becomes crucial.

At the same time, it explains why the minimalist, simple design is often the preferred one, because the simpler the design, the more leeway you have when dressing and watch have to match. 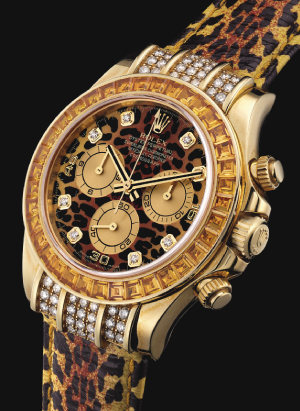 But to make things even more complicated, it is not always the simple and minimalist expression that dominates a dress watch.

An example of an extravagant dress watch that also serves as a piece of jewelry is the Rolex Cosmograph Daytona “Leopard”, which has been seen worn by the American actor and filmmaker Nicolas Cage and the lead singer from the iconic rock band Aerosmith, Steve Tyler.

The Rolex “Leopard” is made in 18k yellow gold adorned with 36 baguette-cut yellow sapphires on the bezel and a dial with 8 factory diamonds.

The price tag is about $70,000, so this watch would also qualify as a luxury watch.

4. A dress watch is an appreciation of watchmaking as an artform!

The history of horology is long and complicated and watchmaking was long dominated by a mechanical approach until the 1980s when digital quartz watches became popular.

Ever since the first pocket watch was invented by Peter Henlein in 1510 until the mechanical wristwatch became popular right after the First World War and on until The Quartz Crisis in the 1980s, great thinkers have devised solutions to improve the mechanical watch, mainly to make it more accurate, but also to make it physically smaller and lighter.

This development story that has lasted half a millennium so far reminds us of all these geniuses who each contributed with their special input and when we wear a dress watch on our arm, we feel that these ingenious watchmakers are somehow still with us.

The fascination of seeing a pile of dead metal parts being assembled with almost superhuman precision and magically given life and soul is as strong and moving in modern times as it has been for centuries, and all the thoughts and feelings that we associate with these ‘wizards’ who made it possible, are inextricably linked to a very special nostalgia that will probably never die out and which is an important part of a dress watch.