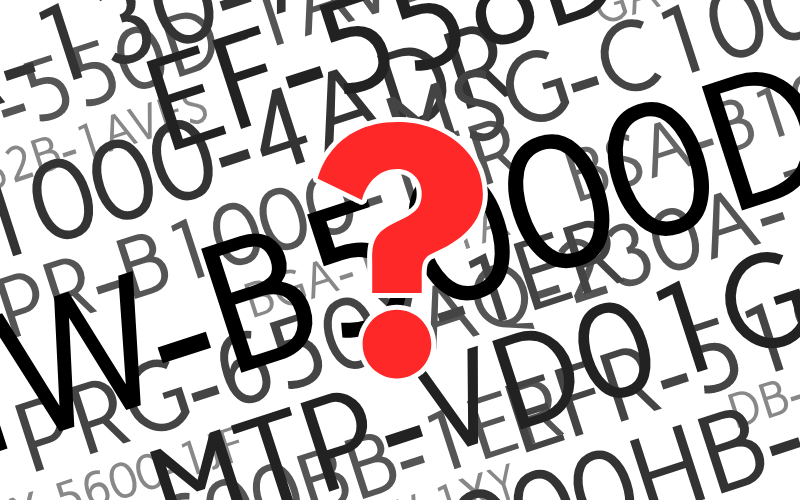 Casio is a popular brand in the world, not least when it comes to their watch collection, but what do the model numbers mean?

The model number is not a random composition of characters, but has a special meaning and in this article you will be guided in how to understand the number.

Why the Casio Model Number Matters

Sometimes you come across two ads that apparently describe the same Casio watch, but have different model numbers.

In such situations, it’s nice to understand what the number means, so you can avoid a mispurchase.

Let me give an example that I have experienced myself.

When Casio launched their line of radio-controlled watches (known by the name of Wave Ceptor) they were produced for local regions and countries, so the radio receiver in many models was only able to receive signals from 1 or 2 of the geographically closest radio transmitters.

It wasn’t a problem if you bought your watch from a local official Casio dealer, but as commerce became widespread on the internet, the risk of buying a watch tailored to local conditions increased.

This meant that you could risk buying a Wave Ceptor watch with a radio receiver that wouldn’t work in your local area because the watch was out of range of the radio transmitter it was intended to receive from.

Fortunately that has changed because nowadays many of Casio’s radio-controlled watches feature Multi Band 6 meaning they can pick up signals from transmitters all over the world.

How to Read the Casio Watch Model Number 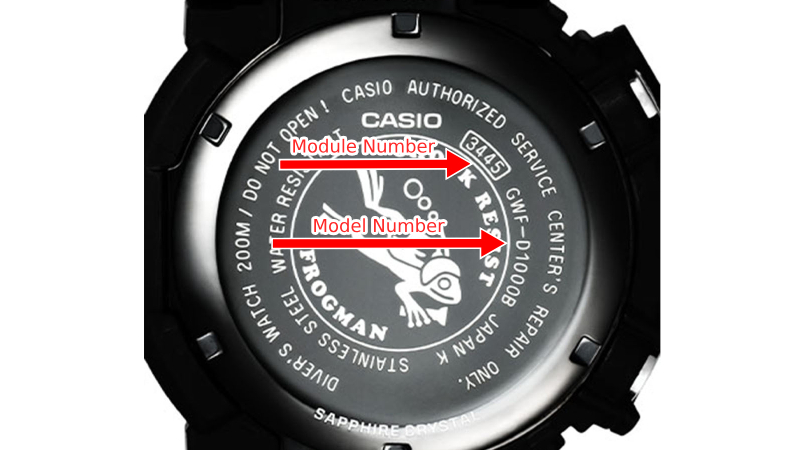 All casio watches have a module number and a model number.

The module number consists of 3 or 4 digits and is the number of the movement in the watch.

It is usually printed in a square on the back of the wach to the left of the model number.

On the back of Casio’s watches you will typically only see the first 2 parts of the model number, as you can see in the picture above.

In ads you will often see the full model number with all 3 parts included.

Fully understandable, but let’s try to explore this a bit more.

For most models, the model number consists of 3 basic parts, typically separated by a dash.

In this article, we will designate the 3 parts as 1st Part, 2nd Part and 3rd Part.

These 3 basic parts can be further divided, but we will come back to that later.

To promote understanding, we will look at a few concrete examples later, but first we will review the general meaning of the model number.

1st Part describes the type of watch and which series the watch belongs to.

The mid part of the model number is an ID number and does not really say much about the specifications, but sometimes the ID is followed by one or more letters describing more details.

The suffix of the model number basically refers to the Color Code, Order Number and Sale Region.

It may seem odd to add information about the sale region in a watch’s model number, but in fact it is a help in some cases, cf. the above example with radio-controlled watches.

In general the suffix of the model number should not be of greater concern if you plan to buy a Casio watch though because Casio today manufactures their watches mainly for sale worldwide.

This might also explain why Casio doesn’t print this part on the back of their watches.

However, if you have a choice between a model targeted at sales in your local area and a model produced with sales abroad in mind, you should always choose the first option.

Let’s take a look at a couple of Casio models to see if we can understand their model numbers.

The first example is the Casio DBC-611GE-1EF.

This model is from the Vintage series and the 1st Part of the model number is “DBC”.

According to the specifications this watch features a databank and a calculator, so it’s reasonable to assume that “DBC” is a reference to the words “DataBank” and “Calculator”.

This particular model is made in a special gold finish, so probably the letters ”GE” refers to “Gold Edition”.

The 3rd Part of this model’s number is “1EF” and does in fact contain 2 different types of information.

As you can see from the Color Code list above “1” is a reference to the color Black, so this piece of information tells us that Black is a dominant color in this model.

“EF” means that this model was produced for the European market.

From the list concerning the 1st Part of the model number, we see that “GG” refers to a model from the G-Shock line.

The suffix in this example is a bit more complex as it consists of 3 different pieces of information.

The number “1” means that the case is Black.

The number “5” means that the dial and/or the hands are Brown.

Finally the letters “CR” tells us that this model was made for Chinese Export.

Please note that this guide is meant to serve as a help to read and understand the model numbers of Casio´s watches only.

Any contribution to improve this guide is most welcome, so if you have knowledge worth sharing with us, please comment below or shoot us an email, thanks.

Is This the Best Casio Edifice Watch Ever?