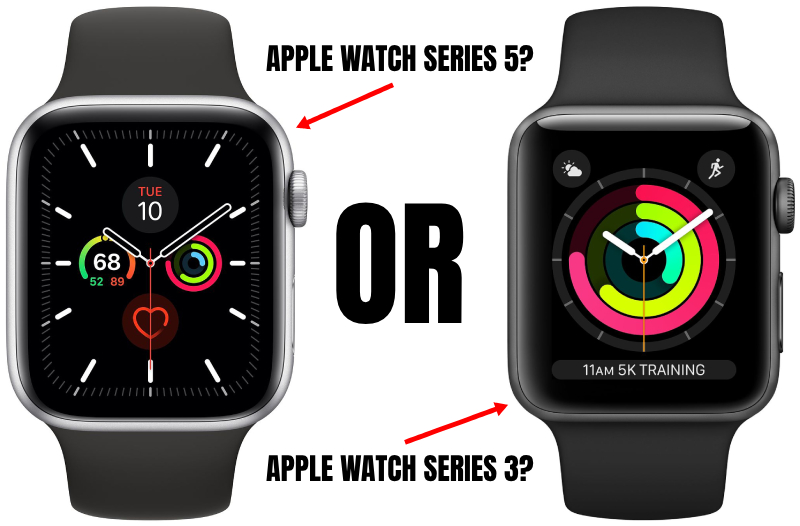 So at last it happened, I’ve had my ancient Apple Watch 1 replaced with the cellular version of Apple Watch 5, so what is more natural than to make a post about it and share the news with my beloved readers!

Also, this article will be focusing on those who consider buying an Apple Watch for the first time, but hasn’t yet decided whether to go for the Series 5 or the Series 3.

I will give you all the reasons why you should go for the one or the other, or perhaps not go for either at all.

I’ve always loved Apple’s products, so when Apple launched Apple Watch Series 1 in 2015, I had no doubt that I just had to have one.

At that point for a while I had built up a great desire to buy myself a new wristwatch, so it was a mixture of curiosity and need that propelled me.

The watch was ordered immediately after the launch and I received it quickly.

After wearing it a few days it became apparent that I would become very fond of this watch and I have never regretted my purchase in the 5 years I have had it.

In general I’ve been very pleased with my old Apple Watch, but some operations had a tendency to be ‘hanging’ too long, like Siri.

I thought to myself that this was probably due to a slow processor and low memory and during five years since the launch of Apple Watch Series 1, I was certain this had been taken care of by Apple.

So it was with great excitement and anticipation that I waited to receive the Apple Watch 5 from Apple.

And to not just leave you there, let me be absolutely clear: The new Apple Watch 5 is simply wonderful!

After 5 years of owning an Apple Watch of course I have discovered an incredible amount of possibilities with the Apple Watch, but the features that have proven to be the most useful for me are interestingly enough also some of the most trivial.

Just look at these 2 examples:

I’m hearing impaired so the haptic feedback feature integrated with the alarm has always been invaluable to me.

No other watch I’ve owned, mechanical or electronic, has had an alarm function that has worked properly for me.

When you are a family father with twin boys who must be transported to school every morning, and you are a night owl who loves to sleep the morning away, this modest feature in itself is worth the whole watch!

It has the consequence that I have to wear the watch during the night and therefore have to charge it during the day, but it has never been a problem for me.

I typically charge for approx. one hour in the evening and then the watch is usually fully charged and can keep power for approx. 1 day.

My short term memory is not very good(!), so the opportunity to be notified on the day I have an important appointment is worth gold to me.

The fact that I can also sync my calendar with the calendar in my iMac and iPhone is just amazing.

When I enter an appointment in the calendar on my Mac or iPhone, it is automatically registered in my watch a moment later.

There are those who claim that the Apple Watch is unnecessary because you can do it all (and more) with your iPhone.

Although this is not an unreasonable claim, when it comes to the calendar feature the Apple Watch is just super smart.

The day I have an appointment, I am constantly reminded of it every time I look at my watch.

It gives me great confidence in remembering my appointments.

To answer the question we have to look at the differences between Series 4 and Series 5 and in my opinion they are quite modest.

On the hardware side the Apple Watch 5 comes with a storage of 32 GB, an upgrade from Series 4’s 16 GB.

Also, you can now get the Apple Watch in Stainless Steel, Titanium or Ceramic, but of course at an additional cost.

Apple Watch Series 5 comes with a built-in Compass, a very nice feature since it’s integrated with the Map-function.

This means that you will always know which direction you are facing when using the Map.

The Always-On Display mode is also a new feature and a quite welcome one too.

But all in all we are talking a minor upgrade here and if I was the owner of an Apple Watch 4, I would be just happy with that and wait patiently until Apple announces the next generation of Apple Watch before considering a replacement.

So, with no serious competition between Apple Watch 4 and 5, then what about Apple Watch 3 and 5?

The first thing to notice is the price difference.

And the price difference is the same if you compare the GPS + Cellular versions.

Obviously, there must be some very good reasons for this, so let’s delve into the details.

The first major difference we notice is the case size.

This new approach meant that when I had to buy, I was very much in doubt about what size to choose.

My Apple Watch 1 is 42 mm and it fits perfectly on my slim wrist.

However, I finally decided to go for 44 mm, not least because it has a bigger display, but also because large watch cases are quite popular nowadays.

It turned out to be a good decision as the watch sits perfectly on my wrist and does not feel bigger than my old Apple Watch at all.

Generally, I would say that if size 42 mm sits good on your wrist, size 44 mm will probably do as well.

As the table shows, there are many differences between Apple Watch Series 3 and 5, so let’s take a look at a few more:

It’s almost impossible to understand how Apple could take so long to implement this option in Apple Watch, but now that it’s a reality, I can only say that it was expected with great longing.

This one difference is not enough to justify a replacement, but it really is a nice feature that will certainly be seen in all future generations.

This app allows you to make electrocardiograms and works with the enhanced Optical Heart Sensor.

The Compass feature may not be that interesting in itself, but together with the Map function it is superb.

Because of the Compass you will always know in which direction you are looking and that makes the Map function significantly more user friendly.

Apple Watch is now able to make an automatic emergency call if you experience a fall where you lose consciousness.

You can never get too much processor power and with Series 5 you get much more computing power than you do with Series 3.

This makes the daily use of the watch feel much smoother.

Originally Apple Watch was only produced in Aluminum, but now you can get it in Stainless Steel, Titanium or Ceramic too.

I’m happy with my Apple Watch 5 in Aluminum, but I wish I’d paid more attention to this option before buying, then I would probably have ordered it in Stainless Steel which simply looks gorgeous…!

In general the sound is surprisingly crisp and clear in the Apple Watch 5 considering the tiny physical space available for the speaker.

In addition, the speaker in Series 5 is 50% louder compared to Apple Watch 3.

Can I Use Apple Watch Without an iPhone?

Yes, but since iPhone and Apple Watch are deeply integrated with each other, you will miss out on a vast array of great features.

As a minimum Apple Watch will be able to tell the time and there’s a number of apps that can be used without an iPhone.

If you get the GPS version, you will still have access to many of the same features available on the iPhone provided the watch is connected to Wi-Fi.

If you go for the cellular version of Apple Watch you will be able to take phone calls, use Siri, stream music and much more.

Apple Watch is fantastic and I’m so enjoying my brand new Apple Watch 5 these days.

For me, the decision to buy the Apple Watch 5 was easy to make because I had to switch from Series 1.

Couldn’t I have saved $200 and gone for Series 3 instead?

Yes, and I’m sure I would have been happy with an Apple Watch 3, but after owning an Apple Watch 1 for 5 years, I just have to acknowledge that my joy and satisfaction with it has never wavered and that’s why I chose to go all the way.

Furthermore, this time I chose to buy the GPS + Cellular version because I knew that the independence of an iPhone would only help to get even more pleasure from the watch.

The first time I received a call far from home and without my iPhone on me, it came as a complete surprise to me.

When you are used to the Apple Watch being connected to an iPhone to provide maximum performance, such an experience seems almost groundbreaking, although cellular smartwatches are not exactly breaking news anymore.

Apple Watch is unlikely to replace an iPhone in the near future (if ever), but it’s clear that for each new generation of Apple Watch the possibilities of using the watch independently of an iPhone only increase.

This means that there are several situations where you can choose to leave your iPhone at home when you are going out.

Phenomenal, as Steve Jobs would say.