or his custom Ferrari 488 Spider fool you, this guy is one of the most unpretentious selfmade multi-millionaires you will ever encounter, online or in real life.

Although he lives the wildest life in luxury, he has managed to maintain his integrity and you get the feeling that while he enjoys his life to the fullest, respect, care and honesty are still important values to him.

His name is Michael Blakey.

Recently, I came across a YouTube channel named ‘ProducerMichael’, which at first glance I considered to be a channel without significant interest to me.

But I noticed that some of the videos also dealt with wristwatches and then I became a little interested again.

I decided to watch one of these videos and discovered that it was both enlightening and entertaining, and that the main character behind appeared as a very likeable person.

I ended up throwing myself over one video after another, including the ones that wasn’t about watches.

So who is this ‘ProducerMichael’?

At the age of only 19, Michael became a co-producer at Hansa Studios in Berlin, Germany, and got to work with many prominent names there.

Through the 1980s and 1990s Michael worked as a session recording drummer and in 1999 he founded the record label 2KSounds.

Since the mid 90s Michael has founded several music production and promotional companies, including Platinum Records, and he has been focusing primarily on management and promotion.

He loves to wear fancy shirts and colorful shoes, he doesn’t touch alcohol and he doesn’t do drugs, except an aspirin from time to time, as he says.

He lives and breathes the good moments of life, is down-to-earth and light-hearted and has a good sense of humor, and with a glint in the eye he has described himself as a ‘modern Austin Powers on steroids’.

And then he collects watches by the way, which in a flash brings us back to this place.

The first watch Michael got was a Rolex Submariner

made in two-tone steel and gold, and he bought it in the late 1970s when he was about 20 years old.

This watch cost him about $4,500 of his hard-earned money and that was a fortune for him at the time. Michael has compared it to buying a house.

Since then Michael has built a collection of watches that can make any connoisseur green with envy.

These watches are so expensive that Michael’s insurance company insists that he keeps them in the bank.

Yep, this is indeed a very fine collection of great wristwatches, so without further ado, let’s take a look at what he’s got.

Subdials, markers and the buttons are Navy Blue.

Michael’s watch does not have the original strap made from genuine alligator skin, but has been replaced by an Horus rubber strap in matching camouflage blue.

The 41 mm verison of Rolex Day-Date has become very sought after among collectors as it’s no longer manufactured, but has been replaced by a 40 mm version.

This Rolex model was specifically designed with motor racing in mind.

The watch itself is made of 18 ct. rose gold, bezel and some parts inside of the watch are made with materials from the historic passenger liner Titanic.

The company has specialized in using unusual materials for construction of selected watch parts.

Richard Mille makes limited quantity of watches, so they are quite rare and hard to come by.

One of Michael’s absolute favourite watches.

very often as he prefers chunky watches, but as a watch collector he feels it would be wrong if the brand was not included in his collection.

Basically the same model as no. 8. on Michael’s list, except this one is made of gold.

Basically the same model as no. 10, only this one is made of stainless steel and much lighter than the version in gold.

Yet another Rolex Day-Date, 41 mm ‘Presidential’, this one blinged out with hour markers made of diamonds while the bezel and bracelet is also covered with diamonds.

Made of white gold and diamonds, the bezel is baguettes with black onyx, bezel turns in both directions.

Another of Michael’s favorites.

Another Cartier Santos XL, but without the chronograph features. White rubber strap. Diamonds on the top of the case only, none on the side or back. 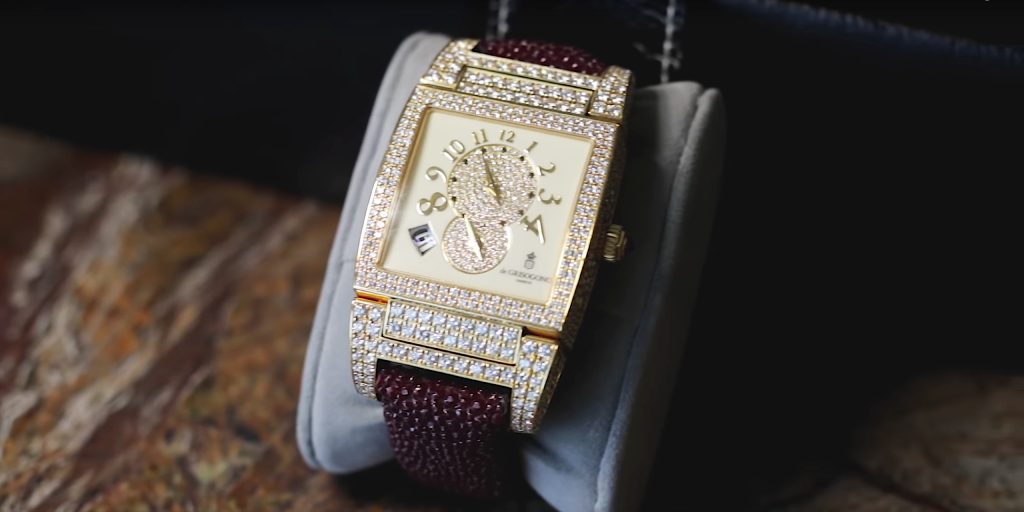 Chronograph, skeleton, worth substantially more than the retail price as they are extremely difficult to get.

Presidential, pavé dial with ruby markers, diamond bezel, other than that it’s a regular president.

40mm, rose gold, diamonds in the bezel, rubber band, has not been modified, it’s all factory.

Michael bought this watch about 25 years ago and back then it was considered one of the most complicated watches ever made.

He believes he paid about $2,000 for this watch, which is less than the price of some of his watch straps.

Basically the same watch as no. 14 on the list, except this one is made of 18 ct. solid gold. Diamonds on the bracelet, double clasp. 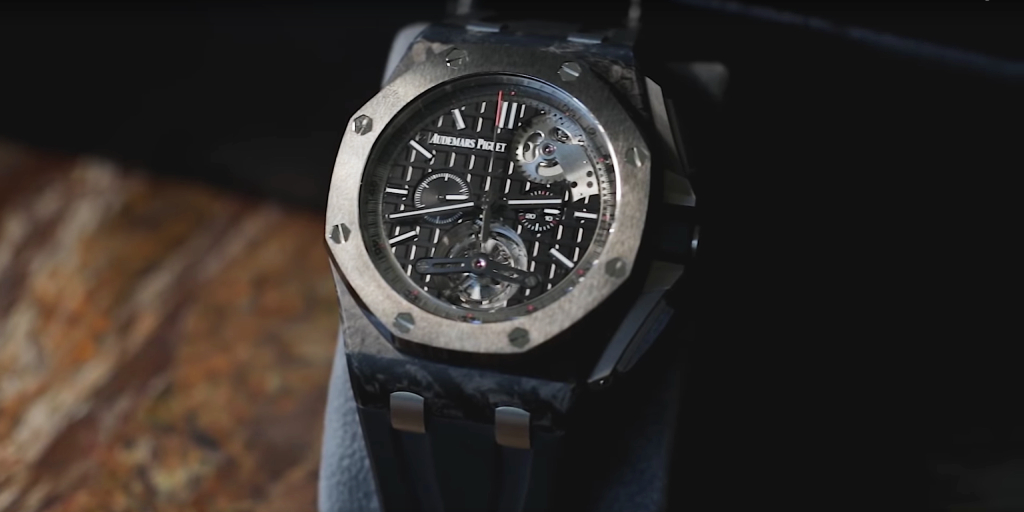 44 mm, super light, carbon composite case, bezel, pushers and crown are ceramic, crown guard and case back made of titanium. 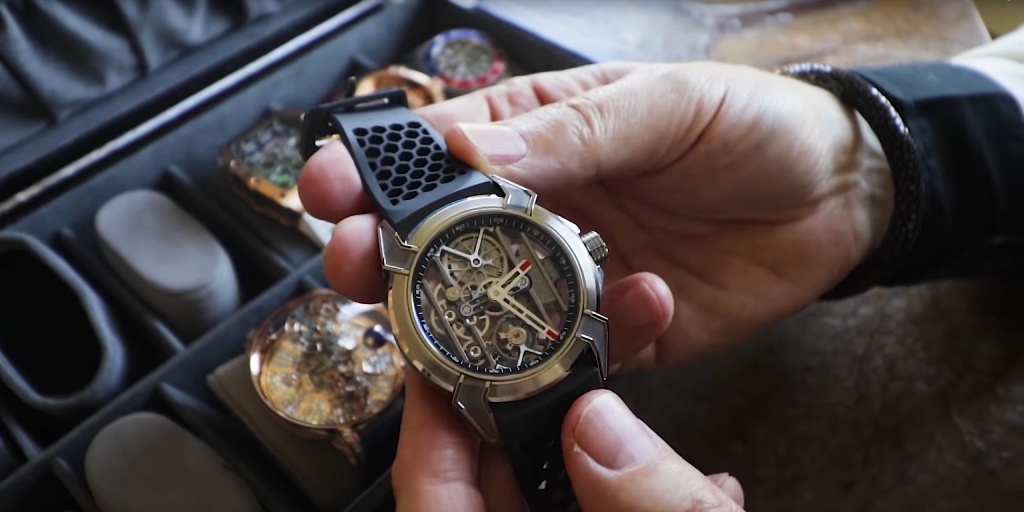 Same as no. 27 except this model is made in rose gold.

The strap is unique as the top is made from alligator skin and the other side is rubber, meaning that the side of the strap that is in contact with the wrist won’t be damaged from sweat.

Michael got this watch as a special gift from a friend and it’s not very expensive.

SwissPL is a company that offers a variety of options to design your own watch including case type, dial printing and tailored caseback and bracelet engraving. 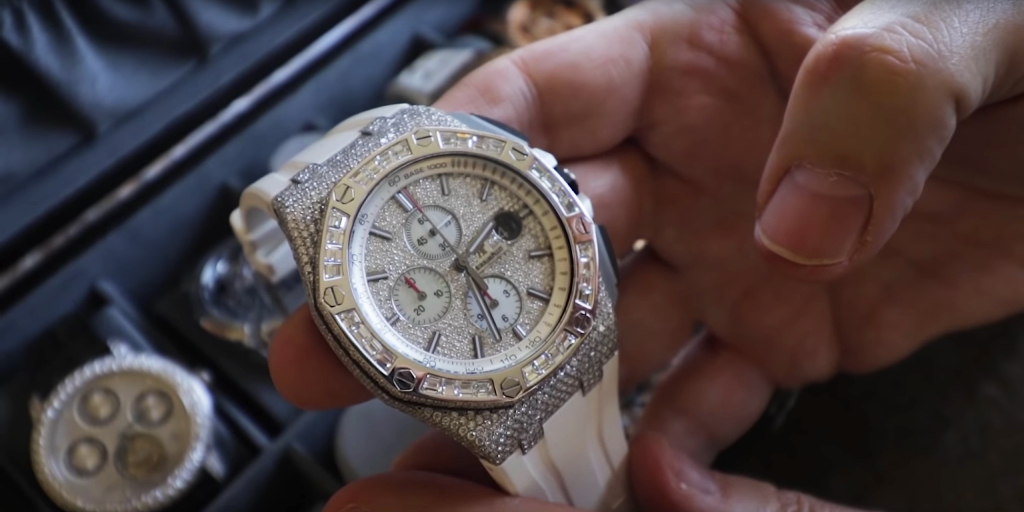 44 mm, bezel covered with baguette shaped aftermarket diamonds, the case itself is pavé diamonds, openwork back.

This model was designed in collaboration with Formula One legend Michael Schumacher.

44 mm, chronograph, bezel made of the ultra-hard CeraMet, dial is anthracite grey. 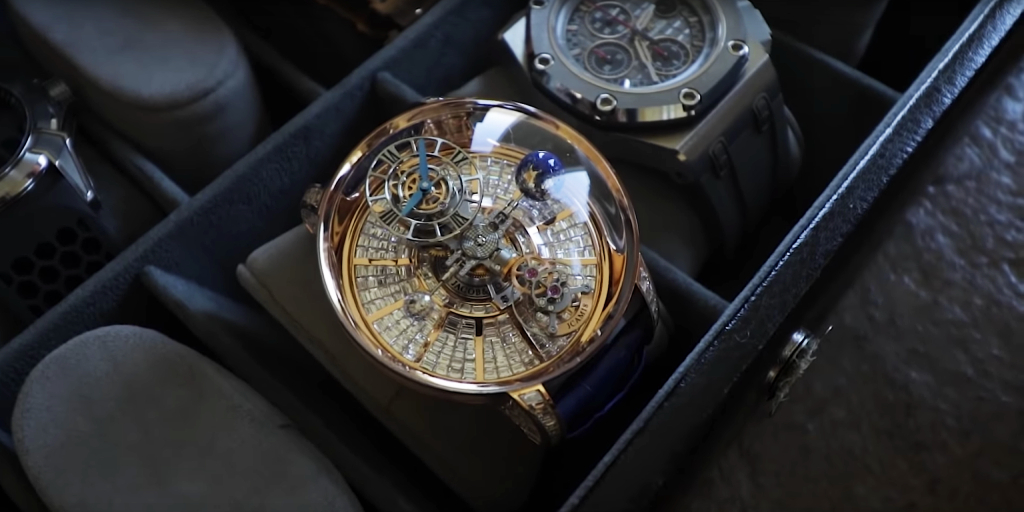 Highly sophisticated watch which in Michael’s opinion is the greatest timepiece that’s ever been built.

That’s the end of the tour through Michael Blakey’s Watch Collection.

All the watches presented in this article can also be seen in Michael’s video series in three parts where he explains about them personally, and I strongly recommend you to visit his YouTube channel and look them up:

And while you are there, in Michael’s own words, don’t forget to “Hit the subscribe button, hit the bell, and with that, see ya!”.

Celebrities and Their Watches – Leonardo DiCaprio