Everyone has heard his name at some point and everyone knows he is unbelievably rich.

But even though Mr. Gates is one of the wealthiest men in the world, the headline for this article is actually a bit misleading, because if there is something Bill has absolutely no passion about, it will have to be expensive wristwatches!

Sure this laid back billionaire lives a luxury life with many benefits that the rest of us mortals do not have access to, but luxury watches are certainly not one of them.

Who Is Bill Gates?

However, the fact that Bill Gates hardly owns a watch collection should not deter us from reviewing some of the watches he has been seen wearing – and here a minor surprise probably awaits some.

But first a little about the man himself.

On Wikipedias dedicated page about Bill Gates you can read that “William Henry Gates III (born October 28, 1955) is an American business magnate, software developer, and philanthropist. He is best known as the co-founder of Microsoft Corporation.”

Gates co-founded Microsoft with childhood friend Paul Allen in 1975 and it went on to become the world’s largest personal computer software company.

Since 1987, he has been included in the Forbes list of the world’s wealthiest people and from 1995 to 2017, he held the Forbes title of the richest person in the world with the exception of four of those years.

In 2006, Gates announced that he would be transitioning to a part-time role at Microsoft and full-time work at the Bill & Melinda Gates Foundation, a private charity foundation that he and his wife established in 2000.

In recent years, Gates has gradually scaled down his activities in Microsoft and handed over all key positions.

During the transition he has increasingly engaged in various philanthropic projects to help causes concerning climate change, global health, development and education.

He has also contributed large sums of money to various charitable organizations and scientific research programs through the Bill & Melinda Gates Foundation. 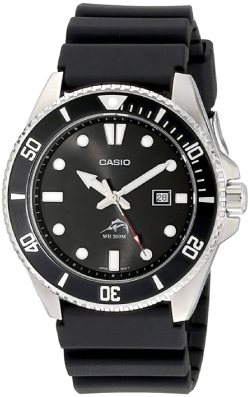 Who would have thought – Bill Gates loves Casio watches and not necessarily the most expensive on the market!

In connection with a guest appearance on The Late Show with Stephen Colbert recently, Gates was spotted with a Casio MDV106-1AV on his wrist.

This Casio model has a retail price of around $70 and is a good example of what type of wristwatch Gates prefers.

Quite remarkable considering that Gates became a billionaire as a 31 year old and in principle can buy any watch regardless of the price!

But even for an incredibly wealthy man this particular quartz model from Casio seems to be a super solid and very nice watch.

The MDV-106 is water resistant to 200 m, which is one of its strongest features. 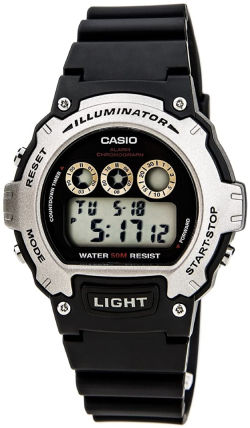 Bill Gates is a gentleman whose personality is rooted in a pragmatic approach and who probably most of his life has been focused on efficiency rather than aesthetics.

Software programmers are a bit like engineers. They are more interested in what’s inside the package than in the packaging, metaphorically speaking. It’s not about appearance, it’s about content and the quality of the content.

Well, Casio makes absolutely beautifully designed watches, not least this model, but there is no doubt that Casio has always been primarily focused on producing user-friendly, high performance watches with strong features accessible to common man, a marketing strategy that seems to go well with Bill Gates’ way of thinking.

This description fits nicely with the next model on the list, the Casio Illuminator, which Gates was spotted wearing first time a couple of years ago.

Celebrities and Their Watches – Leonardo DiCaprio

Casio Model Numbers – What Do They Mean?