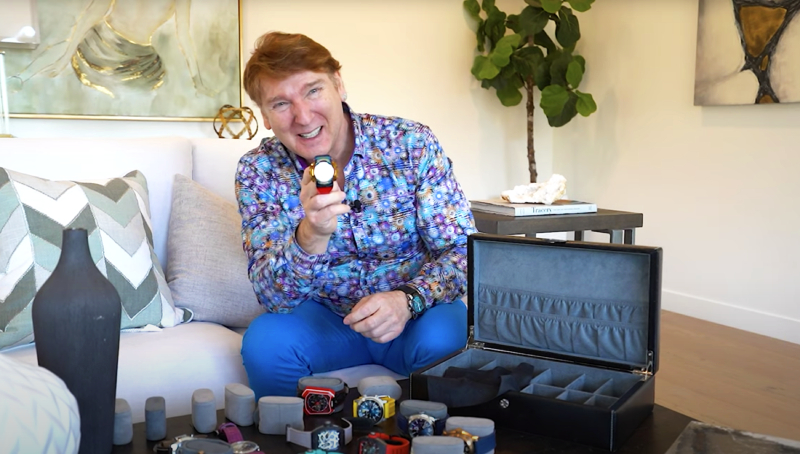 We have dealt with the man before and now we are going to do it again!

When we first published an article about Michael Blakey, it was about Michael’s passion for wristwatches and the amazing collection he has built up over many years. It was especially the expensive watches that were the focus.

This time it will be about the cheapest models in his collection, because as Michael puts it, love of watches is not about the price, but about the watches themselves.

Still interesting words when they come from a collector who owns watches produced by Romain Jerome, Rolex, Audemar Piguet, Breguet, Richard Mille, Patek Philippe, Cartier, Jacob & Co. and the list goes on and on.

But before we go to the watches, first a few words about the man who also calls himself ProducerMichael, a nickname he uses about himself in various places on the web, including YouTube where his channel has over a million subscribers.

When we first wrote about Michael, we described him as follows:

At the age of only 19, Michael became a co-producer at Hansa Studios in Berlin, Germany, and got to work with many prominent names there.

Through the 1980s and 1990s Michael worked as a session recording drummer and in 1999 he founded the record label 2KSounds.

Since the mid 90s Michael has founded several music production and promotional companies, including Platinum Records, and he has been focusing primarily on management and promotion.

He loves to wear fancy shirts and colorful shoes, he doesn’t touch alcohol and he doesn’t do drugs, except an aspirin from time to time, as he says.

He lives and breathes the good moments of life, is down-to-earth and light-hearted and has a good sense of humor, and with a glint in the eye he has described himself as a “modern Austin Powers on steroids!”.

The Cheapest Watches In Michael’s Collection + a ‘Shocking’ Surprise!

It is worth noting that even the cheapest models in Michael’s collection will not be particularly ‘cheap’ for the majority, but nonetheless, these watches stand in stark contrast to the rest of the collection in terms of price.

It’s time to take a look at the list. Please bear in mind that when it says ‘Price’, this is the price Michael paid.

Other given prices are based on a rough estimation.

Also, the list has been compiled on the basis of a video presented by Michael himself. You will find a link to the video below after the list. 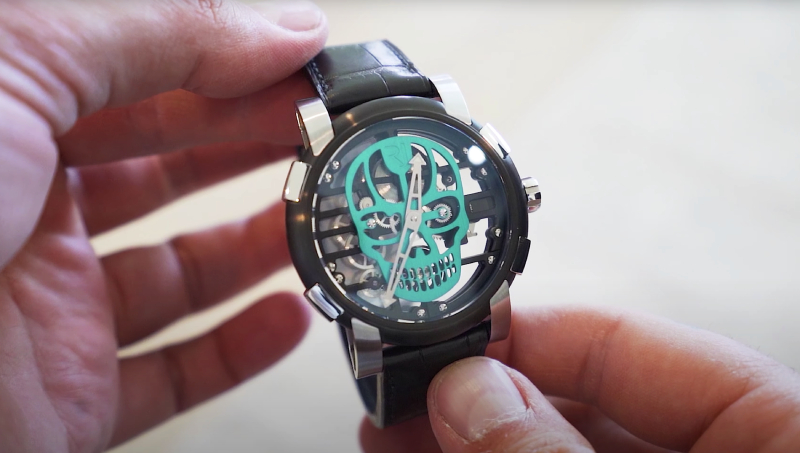 This model from Romain Jerome is a so called ‘skeleton’ watch meaning it has been designed to allow the user to see through the 48 mm case.

It’s by no means a new idea, but in this case, it makes extra good sense because of the eye-catching skull!

Romain Jerome is a relatively young company and has only been producing watches since 2004, but is considered to be one of the absolutely recognized names today.

RJ are also known for using unorthodox materials for watchmaking, including not least in connection with their Titanic DNA Series, where certain parts of the watch are actually made from authentic parts from the legendary passenger liner Titanic itself. 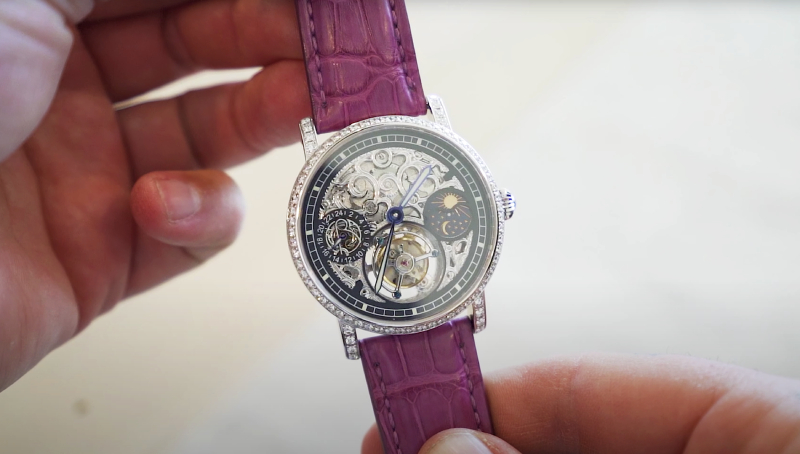 It is no surprise to us that Michael has chosen to include an ERA Prometheus in his collection of cheap watches.

ERA Prometheus is made by ERA Timepieces, another young company whose productions we have previously had under the microscope.

This model was once launched as one of the world’s absolutely cheapest tourbillon watches, but without compromising on quality.

Read more about this model and the company behind it by following the link below. 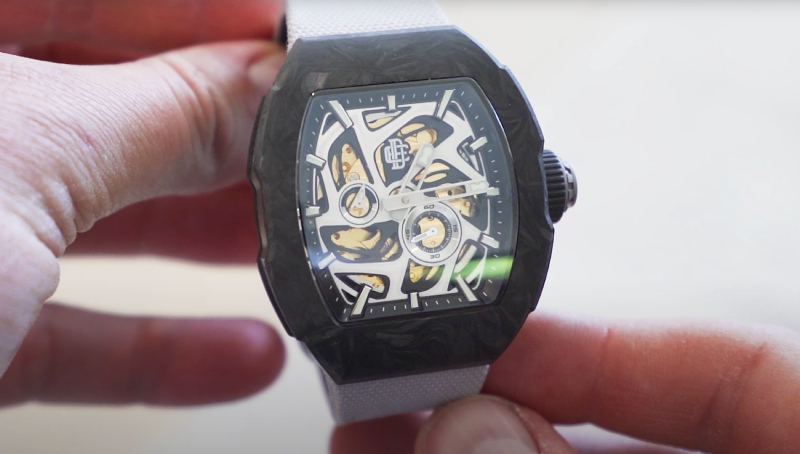 Michael didn’t know much about the next watch on the list, a Davis Elvin model belonging to the Roma Series, but he bought this watch mainly out of curiosity and also because he never saw this watch in any store.

And just to make sure not to miss out anything, he actually bought three of them!

It has a striking resemblance to a Richard Mille and there can be no doubt that the inspiration stems from there.

The company behind the watch claims that the design is inspired by the Drake Strait, now better known as the Drake Passage, a body of water located between the Atlantic and Pacific oceans.

The watch has a carbon fiber case and a fluorine rubber strap. 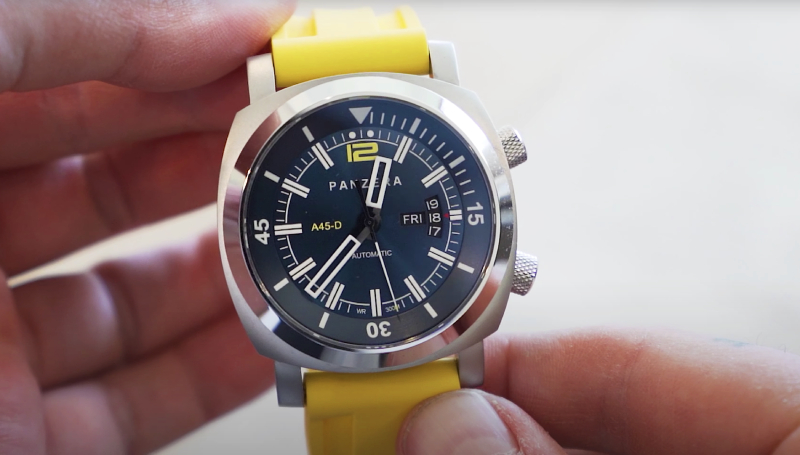 The Panzera A-45D is an automatic meaning it is a selfwinding mechanical watch.

Michael owns several variations of the A-45D, but he didn’t buy them, all of them was given to him.

Nevertheless, it’s a watch he really likes and he wears them often.

We can understand that, because this is in fact a handcrafted, super-solid, high-quality watch water resistant to 300 m and made of the finest materials.

It is also one of the most inexpensive watches in Michael’s collection. 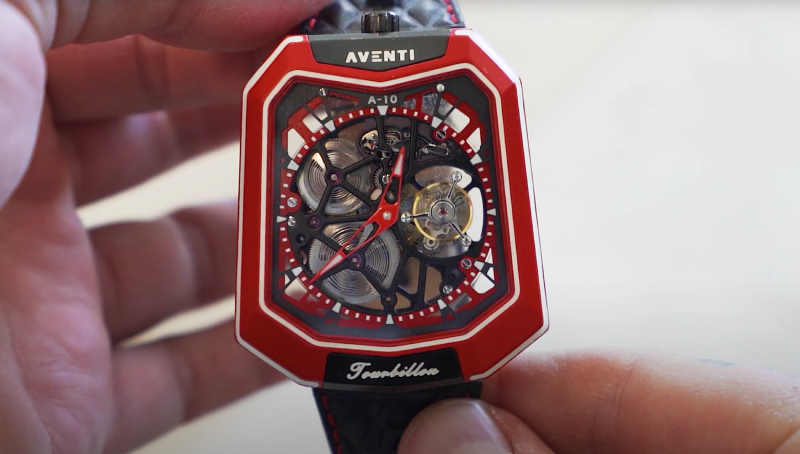 The next model on the list is a hand-winding Aventi watch in Rosso Red from the A-10 collection.

The 48.5 mm case is made entirely of titanium and the same goes for the clasp.

It has 25 jewels, a power reserve of 72 hours, sapphire crystal and it is water resistant to 50 m. 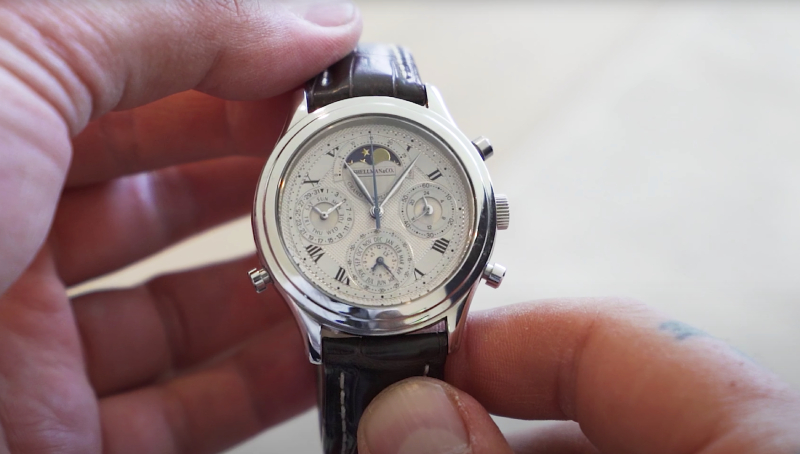 Although the Shellman Grand Complication “CLASSIC” appears to be a mechanical watch, it is in fact a Japanese battery-driven quartz watch particularly known for its many complications.

However, the jump to an expensive mechanical watch with similar features may not be as far as you may think.

For example, this watch consists of 300 parts that it takes 4 months to assemble. In addition, the subdials are very similar to those found on mechanical watches, including not least the moon dial which at all times shows the correct lunar phase.

An impressive watch for the price! 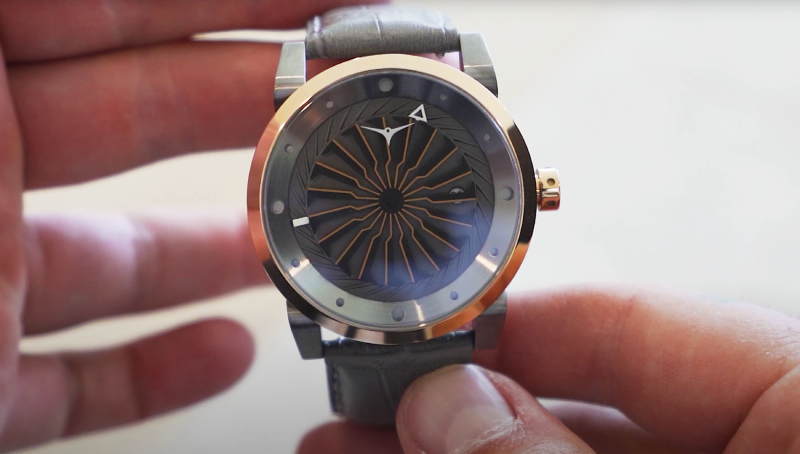 The Zinvo Blade Spirit is a bit of a curiosity in the sense that the dial and the hands has been designed in a quite unique way.

Perhaps a bit too unique for some, because Michael claims he never figured out how to tell the time on it!

(We don’t quite believe that, but we get the message!)

Nevertheless, it is an exciting watch and not even expensive at all, only two to three hundred dollars on Amazon. 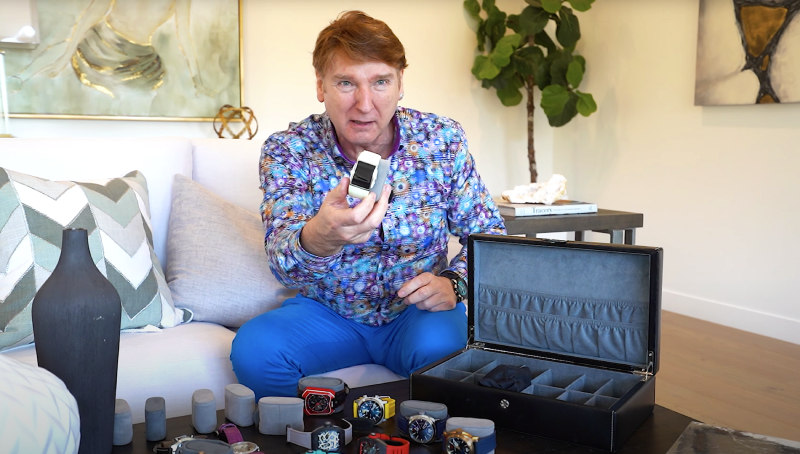 Michael refers to his next watch on the list as his “gas station watch” simply because he went to a gas station, saw this watch there, fell for it and bought it.

Unfortunately Michael has not provided a closeup image of the watch and doesn’t refer to it by name, so we are quite uncertain which manufacturer and model we are talking about here.

What we do know about it, is that it is a battery-driven quartz watch and probably the cheapest watch in Michael’s collection!

9. The Big Surprise Watch! (and shocking too btw!) 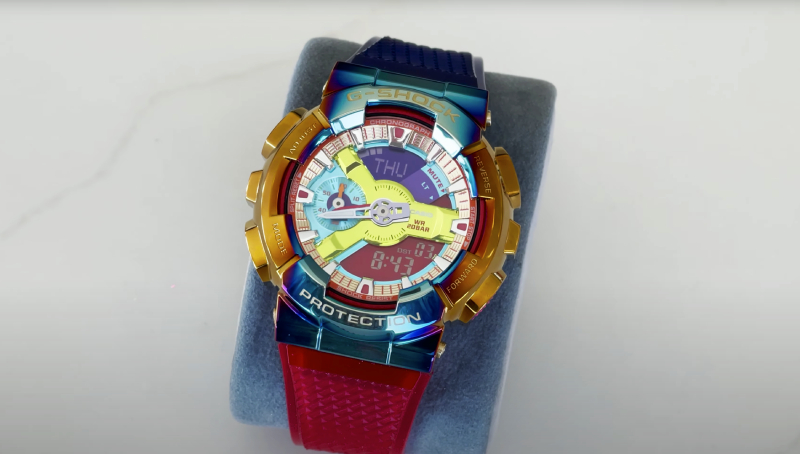 So what is all this about?

In order to fully understand, you have to have a little background story.

In short, the thing is that Michael’s loyal camera man Adam is wearing a Casio G-Shock watch and has done that for years, while Michael have never really shown interest in this brand, more the opposite… until now!

When you are familar with Michael’s taste, It is not hard to imagine why he fell for this particular model though.

The model we are talking about here is the Casio G-shock GM110RB-2A and it is available on Amazon.

Most remarkable about it is probably the flashy, colorful appearance, but it is a genuine G-shock watch with all that stands for and that should not be underestimated.

That’s all for now, folks!

Michael’s video about his most inexpensive watches is here or you can see a list of all his videos here.