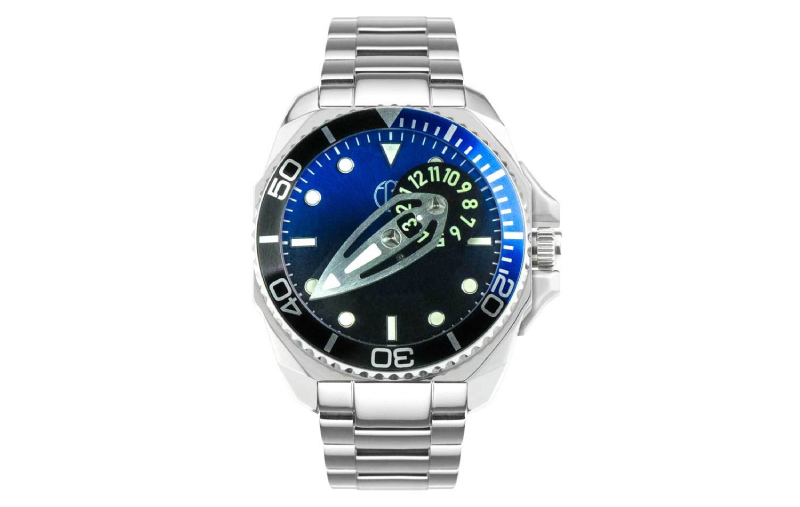 It has not been released yet, but expectations are towering and preorders are flowing in at this point.

We are talking a diving watch classified with a Water Resistance of 1,000 m, equipped with a Wandering Hour Movement and Swiss Made.

Once again ERA Timepieces makes rings in the water, this time in the literal sense!

In my reviews of the ERA Prometheus and ERA Solaris, I have described in detail who ERA Timepieces are and how the company came about.

In short, the company is critical of the generally very high price level of Swiss Made complication watches, which in effect cut off the majority from ever being able to own one of these watches.

ERA Timepieces believes that it has found a way to penetrate the market, and they claim that it’s possible to produce the coveted watches in the same high quality as the well-known brands and at prices that are far below the typical market prices.

You can read about their business model in my articles on ERA Prometheus and ERA Solaris. 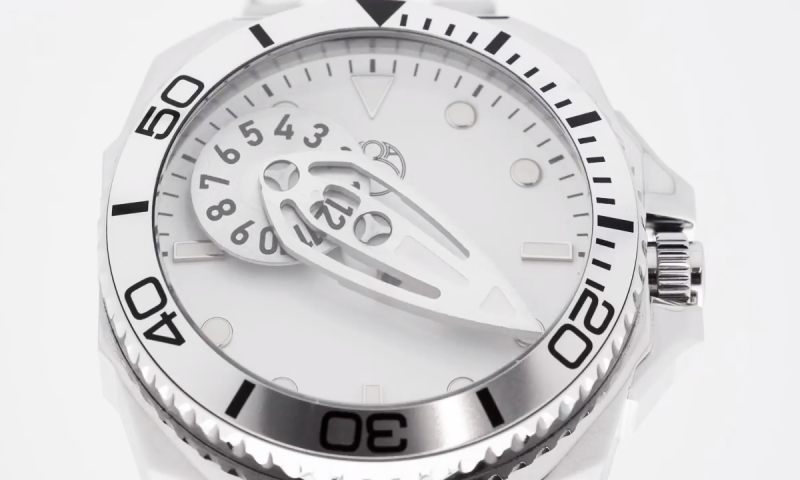 It’s no secret where ERA Timepieces have taken inspiration from creating the Poseidon, as evidenced both by their promotional videos and when studying the watch itself.

It is no less than the iconic Rolex Submariner

that has been under the loupe.

The Submariner was launched in 1953 and was the first diving watch to be water resistant to 100 m and the model has been a classic ever since.

It’s especially the Poseidon’s bezel, the hour markers and the color gradient themes that bear resemblance with the all-time Rolex bestseller.

But then any comparison ends and this is mainly due to the built-in Wandering Hour Movement.

And with the Poseidon, the main idea behind has been the same as with the other watches made by ERA Timepieces, namely making unique high-quality watches with these typically very expensive complications, accesible to common man.

At a price of $1,399 for the Standard Edition in 316L Stainless Steel and $1,899 for the Platinum Plated Neptune Edition, it’s only fair to claim that this mission has been accomplished just fine.

The principle behind the Wandering Hour is that there is only one hand, the minute hand, on which is attached a subdial showing the hours.

The current hour is displayed in a small window on the minute hand.

The minute hand on the Poseidon is in fact modeled after the Megayachts on the French Riviera and it’s handcrafted.

The Poseidon is also equipped with a Helium Release Valve and can withstand the depth of up to no less than one thousand meters.

Each watch is engraved with a unique identifier making it a limited edition.

In Greek mythology Poseidon is the god of the sea, earthquakes and horses.

He is known for his bad temper, emotional unpredictability, greed and for being vengeful when insulted.

The more I study the ERA Poseidon, the more I like it.

At first I thought it was a bit too raw in expression for my taste, but somehow it eventually sunk in with me.

I prefer the Adventure Theme where the colors are kept within a relatively narrow spectrum, but I also like the Deep Sea Theme.

There are a couple of cool facts about this watch that immediately catches ones attention – The Wandering Hour Movement and a Water Resistance of 1,000 m.

The WR classification means that this watch can be used in connection with Deep Sea Diving.

Deep Sea Diving allows you to descend beyond the recreational Scuba diving limit of 40 m, so this is one of those rugged watches aiming at extreme activities, but still elegant enough to be worn in situations where dress code is the key word.

This watch should be a natural choice for people into sailing, boating, diving and basically anyone with a craving for sea activities.

I mentioned earlier that the legendary Rolex Submariner has served as inspiration for the Poseidon as it has been emulated by many watch companies through decades with more or less recognition.

ERA Poseidon also has a few recognizable elements from the Submariner, but overall the design is quite original and I don’t see the Poseidon as a spin-off at all.

The multi-faceted case design and the yacht-like minute hand, for example, makes it too unique.

Prices are not comparable either.

A Rolex Submariner is in the neighbourhood of $7,500-$8,500 depending on the model, so the price difference is significant.

Also, a casual glance at the Poseidon leaves you with an impression of freshness and confidence, while the association with the sea is unmistakable.

The design is on the bold side without being overdone and does not really resemble other diving watches. Still, it exudes force, harmony and elegance.

It’s a shame that you can’t opt ​​for a rubber band instead of stainless steel, but perhaps ERA Timepieces opens up that opportunity some time in the future.

I wonder if the ERA Poseidon will become as popular as the ERA Prometheus.

I wouldn’t be surprised if that happened.

ERA Solaris – One of the Best Tourbillon Watches?