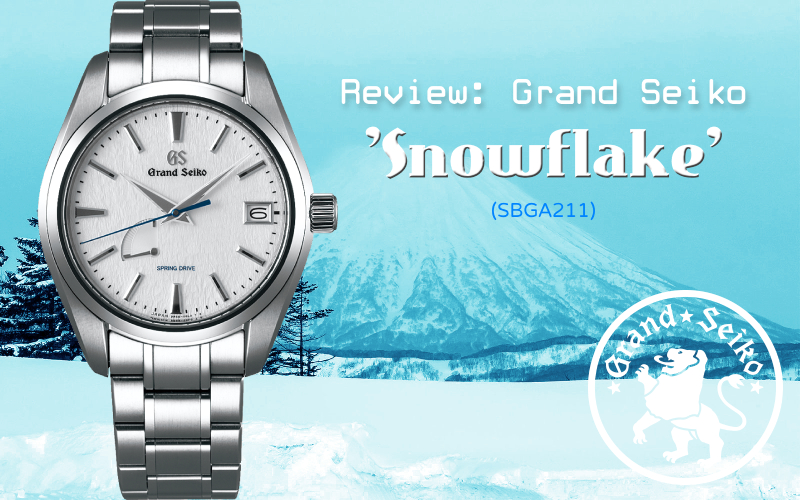 There is nothing particularly extravagant about Grand Seiko Spring Drive SBGA211, better known to fans as the ‘Snowflake’.

The design is kept quite tight and traditional, but it is within these limits that Grand Seiko ‘Snowflake’ unfolds and goes all the way.

Whereever the eye lands, the edges, the printing, the sheen and every tiny area appear razor sharp, and it’s simply a joy to study this watch in detail.

Not to mention the motion of the second hand gliding smoothly round the dial that resembles a harsh snow landscape and which, due to this very special texture, gave the model its nickname ‘Snowflake

And the inside of this beautiful watch isn’t less remarkable.

More about that in a moment.

Grand Seiko is a watch brand owned and developed by Seiko in the same way that Tudor is an independent brand under the Rolex company.

The main reason Rolex created Tudor was to make room for an affordable alternative to their premium line by outsourcing parts of the manufacturing process and thus opening up new markets.

With Grand Seiko things sort of happened the other way around.

Seiko was founded in 1892 and while the company’s popularity kept growing through more than a half century and the Seiko watches were constantly improving, they thought they could do more.

Driven by the ambition of producing the most precise, durable, easy to wear and beautiful watch the world had ever seen, a team of Seiko’s most skilled watchmakers was put together and thus Grand Seiko

The first Grand Seiko model was released in 1960 and featured the new caliber 3180 accurate to within +12 to -3 seconds per day and a power reserve of 45 hours.

While the look and feel of the ‘Snowflake’ is an experience by itself, the movement is even more impressive.

The 9R Spring Drive Movement is automatic and based on Seiko’s Magic Lever mechanism developed in 1959, but with improved productivity, maintainability, and durability to enhance winding efficiency.

What’s truly remarkable about the Caliber 9R65 is its accuracy which is ±1 second per day / ±15 seconds per month (average).

This is mind blowing for a watch wound by a main spring.

In terms of accuracy this brings the ‘Snowflake’ into the same league as quartz watches.

A standard quartz watch has a deviation of 15-30 seconds per month while Grand Seiko quartz watches has a yearly rate of only ±10 seconds.

The ‘Snowflake’ gets its energy exclusively from the mainspring just like any other mechanical wristwatch, so what exactly has Grand Seiko done to accomplish this high level of precision?

Traditionally the escapement mechanism consisting of the balance, pallet and escape wheel regulates the energy pulses driving the gear system while the ‘Snowflake’ is controlled by an electronic regulator.

A: Mechanical power, from the mainspring.

B: Electrical power, creating a reference signaling via a quartz oscillator.

C: Electromagnetic power, to apply a brake via a rotor/stator.

The electricity generated to drive the quartz oscillator and rotor is created exclusively by the unwinding mainspring.

This allows the ‘Snowflake’ to be entirely autonomous, with no need for a battery, solar cell or other power source.

If you are familiar with the Grand Seiko series and have done some research about it, you may have come across the saying “Buy a Rolex to impress others, buy a GS to impress yourself”.

Of course, it is first and foremost Grand Seiko fans that have made the saying popular.

However, the saying is interesting partly because of the comparison between the two brands, and partly because it suggests that a Rolex watch is a status symbol, where a Grand Seiko watch, in turn, is not.

Actually I’m uncertain of the deeper meaning because I could easily buy a Rolex Day-Date and enjoy it to the fullest without having to show it to others, but I think the basic meaning is that Grand Seiko is comparable with the more expensive Swiss watch brands.

Where Rolex has remained true to the traditional way of producing mechanical watches and focused on developing better materials and improving the individual parts of the watch and the interaction between them, Grand Seiko has chosen to take a different route.

In essence, Grand Seiko has studied the original blueprint for how to make a mechanical wristwatch, concluded the scope and type of the major weaknesses, and then asked modern science for advice on finding solutions.

The Japanese saw, among other things, a need to improve the accuracy of the movement and the breakthrough came with the invention of the Tri-synchro controller.

Could Rolex have done something similar?

But then why didn’t they?

Because Rolex is looking to make improvements based on the traditional way of building mechanical wristwatches and determined to continue along that road.

The history of horology is long and proud and as a leading force Rolex, along with many other Swiss high-end watch brands, have simply chosen to move forward without too many twists and turns.

The way Grand Seiko has gone is probably a dealbreaker for some and for others it’s a new, exciting and innovative way of making mechanical wristwatches.

For lack of better, it may be comparable to a vintage car having its original engine replaced by a hypermodern state-of-the-art, which is obviously both more powerful and more efficient.

The question is whether it makes sense?

Now, if it sounds like I’m skeptical of the ‘Snowflake’, make no mistake, I absolutely love this watch.

The Asian approach to watchmaking may be different from the European, but I don’t see the one way excluding the other, I rather see them complementing each other.

In short, the ‘Snowflake’ is overwhelmingly beautiful in terms of both physical appearance and technical ability, and I personally am over the moon about it.

If you love high quality mechanical wristwatches with particular focus on accuracy and perfection, it’s hard to get around the ‘Snowflake’.

It’s simply too good to be overlooked.