Strap, band, bracelet, dear child has many names, but all these terms refer to the bracelet that straps a wristwatch onto the wrist for convenient mobility.

There are many different types of watch straps. They can be made of widely different materials including leather, plastic, silicone rubber, cloth, nylon or metal, and even the closures can be very different depending on the type of strap.

This time we will try to answer the question: What Is a NATO Watch Strap?

What Is a NATO Watch Strap?

The NATO watch strap aka the NATO strap or G-10 was developed by the British Ministry of Defence for specific use during wartimes.

They were originally made of woven nylon for primarily two reasons. Partly to minimize skin-metal contact and partly because nylon straps generally sit fairly stable on the wrist.

A special feature about NATO strap is the fact that it is made in one piece unlike many other types of watch straps which often consist of two parts.

In practice, this means that it is easy and quick to apply or replace as the strap goes underneath both spring bars.

Another benefit of the NATO strap is that even if one spring bar were to break loose, the watch would still be securely attached to the strap.

Although the striped NATO straps are quite popular and manufactured by many strap producers, the original NATO strap was made in a single color, namely admiralty grey.

A genuine NATO strap is hard to come by, but if you are looking for a NATO style watch strap and want it to be as close to the original as possible, you should look for these properties that all applied to the original:

The Origin of NATO Watch Straps

As already implied the NATO strap has its origin in the military and was developed by the British Ministry of Defence in 1973 for particular use by the British Special Forces.

The strap quickly earned its nickname “G-10” because it was required to fill out a G-1098 form in order to receive a copy.

The term “NATO” derives from the alfanumeric code used in the British MoD to identify all standardised material items of supply.

In other words, the term “NATO” is a bit misleading as the NATO strap was not developed by NATO, but rather for a NATO member country. 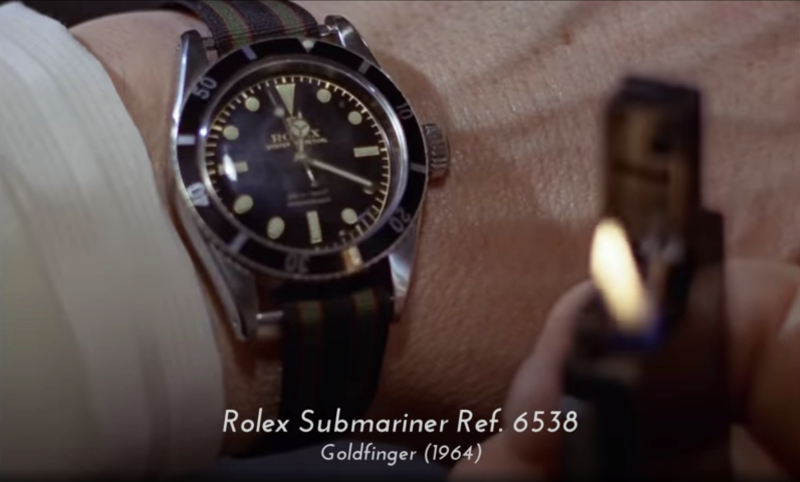 There’s a widespread misconception among fans that one of the most iconic characters in movie history, the British spy, James Bond, was seen wearing a NATO watch strap in the movie Goldfinger (1964), but since the original NATO strap was launched only 9 years later, that couldn’t have happened.

In addition, the pattern and colours are wrong too. In the movie the striped strap seem to be in blue, green/grey and red tones, as you can see from the color enhanced screenshot above, but as mentioned earlier the original NATO strap came out in a single colour. 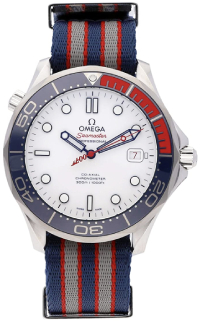 Speaking of Bond Omega has released this very special wristwatch as a tribute to the British agent loved by fans all over the world.

The striped NATO style watch strap comes quite close to the one worn by Sean Connery in Goldfinger with its blue, red and grey colour tones.

Perhaps even more interesting is the watch itself as it has to be described as an absolute top notch timepiece.

We know what Omega is capable of, just think about the Moonwatch, a timepiece that was tested mercilessly by NASA before being approved as the only piece of equipment not being developed by NASA itself to be accepted into the Apollo 11 program.

And this special Seamaster edition is no exception.

As this is a Limited Edition only 7007 pieces has been made.

Interesting number, but you have noticed that, of course. 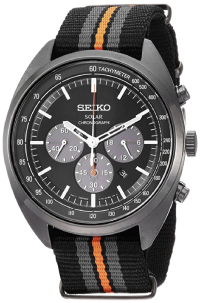 Seiko has a well-earned reputation of producing super-solid, durable timepieces and with the Recraft Series they intend to combine inspiration from their own vintage models with the in-house Seiko caliber V175.

This model has a twin brother, the Seiko Recraft Model SSC667, and the main difference is the colour theme although the SSC669 is a bit more expensive due to the IP-coated black case.

However, they both ooze of harmony and excellence not least thanks to their intelligent colour composition.

SSC669 is solar powered and the photovoltaic cells has cleverly been placed beneath the subsidiary dials so they go completely unnoticed while charging the battery inside.

A small date window has been placed between the 4- and 5 hour marking, not unlike the Seiko 5 series that usually has the date window placed at the 4-hour marking.

Other features worth mentioning is the sweeping second hand, 24-hour indicator, minute and second hand coated with Seiko’s LumiBrite luminant and a water resistance of 100 m.

What Is a Milanese Watch Strap?