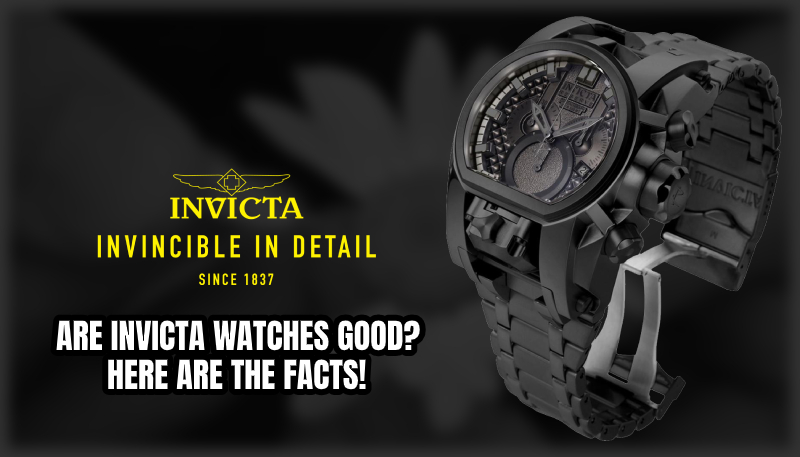 If there is one watch brand that can create doubt and share the waters, then it is probably Invicta.

But what is the reason that some people love this brand while others almost hate it?

“Are Invicta watches any good?”

“Why are Invicta watches so cheap?”

These questions are among the most common on Google and for good reason.

Invicta watches are often on sale at greatly reduced prices and it seem therefore quite logical that potential buyers have doubt about this branch.

Invicta is originally a Swiss watch company, which usually stalls for high quality, and at the same time the watches look undeniably fantastic!

“How is the quality?”

Invicta Watch Group began as a Swiss watch company in 1837.

It was founded by Raphael Picard in La Chaux-de-Fonds, Switzerland.

In 1991 the brand was re-established when it was acquired by an American company.

When it comes to taking stock of the quality of a product, what could be more natural than asking the users themselves! After all, it is the users who test the products daily and thus can give the best, impartial rating.

Let us therefore try to analyze the users’ ratings of Invicta watches and compare them with the ratings of other well-known brand watches.

We will compare the two sets of evaluations and try to reach a better understanding of how they should be perceived.

Note that this comparison is only intended to understand the ratings itself and how the overall score should be interpreted.

It is not a comparison of the two models or an attempt to conclude which watch of the two is the best.

There are some who interpret the ratings for Invicta watches on Amazon as an expression of a major disagreement about the quality. Although there are exceptions, I do not agree and I will try to explain why.

Let’s look at the users’ assessment of a randomly selected Invicta model on Amazon: 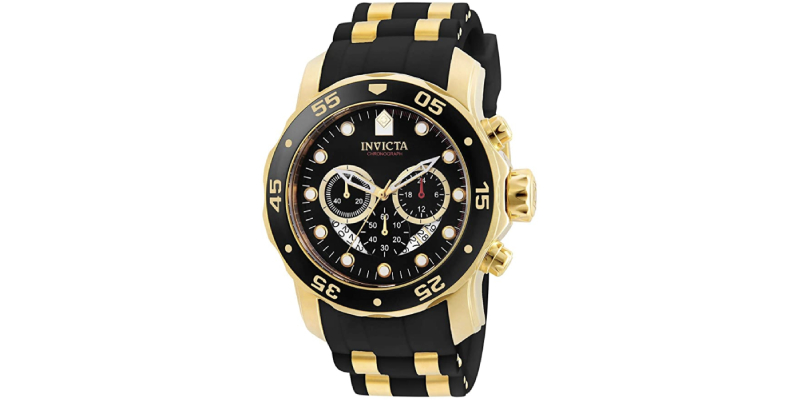 The above model is the Invicta 6981 Pro Diver from Invicta’s popular Pro Diver collection and as it appears from the ratings below, no less than 2,881 reviews have been given and 217 questions have been asked regarding this model.

That means there is an overwhelming interest in a watch that only costs $80!

That in itself is quite interesting. 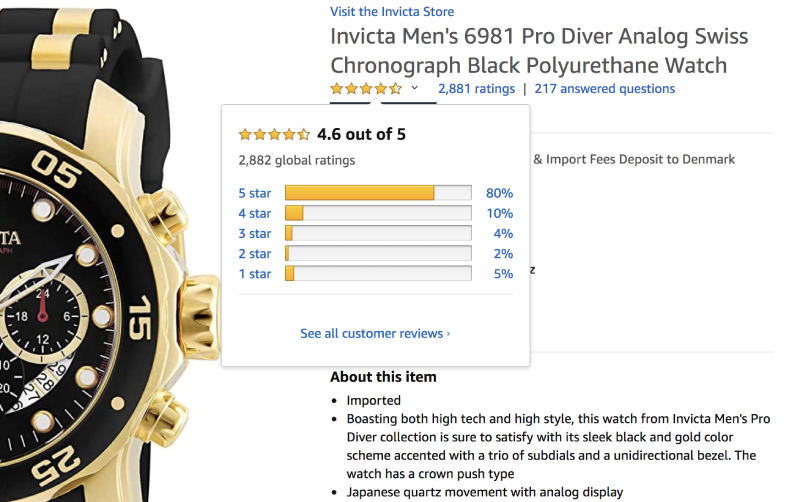 And users are generally in no doubt about their satisfaction with this watch. Out of 5 stars, 4.6 have been given on average and that is quite a high average considering that so many ratings have been given.

Now let’s assume that all 3 to 5 star ratings are an expression of a certain minimum level of customer satisfaction.

A convincing number that overall expresses great satisfaction with this product.

Now let’s look at the user reviews of a popular Citizen model on Amazon. 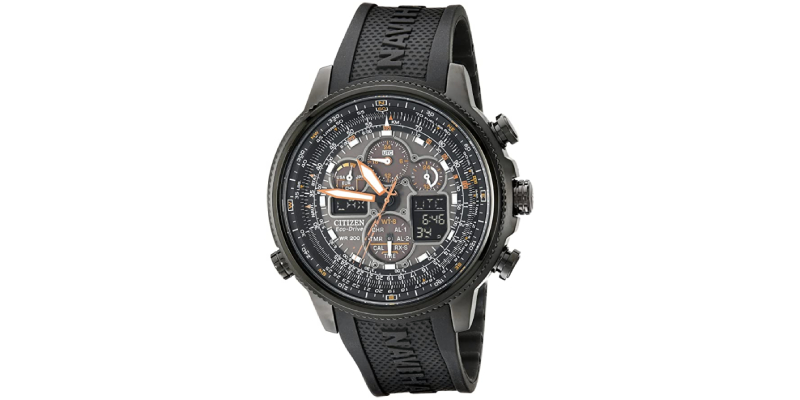 The model above is the Citizen Eco-Drive Navihawk JY8035-04E and comes from Citizens Eco-Drive collection and below you can see that there has also been a lot of interest in this model with 807 reviews and 115 questions.

The average score lands at about the same as for the Invicta model, namely 4.5.

And let’s try again to see how many users have given 3 to 5 stars out of the total number of ratings. 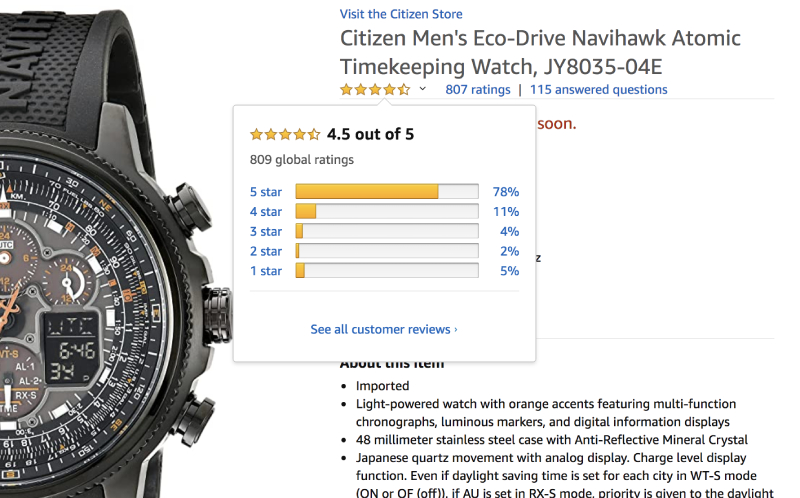 The price is not given in the picture, but this watch was sold on amazon used for $479.99 and up which is 6 times more expensive than the Invicta watch.

What’s really striking about the two set of ratings is how similar they look.

Does this mean that these two watches are at the same quality level?

Not necessarily, and in this particular case, probably not.

But what can be concluded from the two sets of ratings is that both watches have equally managed to meet buyers’ expectations.

In other words, the buyers of the Invicta model shown have generally been satisfied with their purchase.

However, it is worth noting that the rating system on Amazon for good reasons does not say much about the sold products’ durability, as most of the ratings have probably been given shortly after purchase. 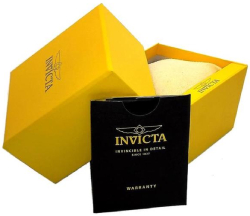 Speaking durability, an Invicta watch usually comes with a 5 year warranty certificate and while that sounds both appealing and reassuring, it may not be so much.

The problem is that the shipping cost associated with submitting the watch for service often goes to the buyer and since this expense is up to $30, the question is whether it is worth initiating this process in the first place, especially if the purchased watch is one of the cheaper models.

In such case you may be better off buying a brand new Invicta instead – or another brand, for that matter.

Essentially this makes the warranty worthless, at least when it comes to the cheapest Invicta models.

Life is so unfair!

But what if you decided to look at it this way instead:

It may sound a bit harsh, but here’s the thing.

When you pay a lot of money for a Swiss Made brand watch, you pay for good materials, all (or most) internal parts are produced in-house, an elite watchmaker assembles the watch by hand and a thorough quality test is being executed subsequently.

Invicta skips several of these steps in order to keep production costs down and thus gain access to a larger customer segment.

So essentially, if you buy one of the cheapest Invicta models on the market, you may be purchasing a timepiece that will last for years and you may not.

This is the risk you take, no matter how small.

Invicta has been on a long journey and there is no doubt that the name Invicta was once synonymous with the best quality in watchmaking.

‘Invicta’ comes from Latin and means ‘invincible’, but while that sounds quite compelling, the company is after all not what it used to be since the glorious days in Switzerland and it is especially seen with their very cheap models.

Both on Amazon and in various watch forums, one gets the impression that it is especially the most inexpensive Invicta models that can cause problems.

Where many prominent Swiss watch companies have managed to hold their own, not least through the turbulent Quartz Crisis of the 1980s, Invicta has chosen a different route.

Although the company pride itself on being ‘anchored in a dedication to detail’ and ‘setting criteria for exceptional standards’, the days of Swiss Made wristwatches are long gone.

Today, the corporate headquarters for the company are located in Hollywood, Florida, in the United States.

The company has been focusing on affordable timepieces available for a broad customer segment since Invicta Watch Group was re-established in 1991.

This means lower prices, but it also means that not much money has been set aside for quality control, which is something that is otherwise taken strictly seriously when we talk about genuine Swiss Made watches.

This is seen, among other things, by the fact that the movement in an Invicta watch is not produced in-house, but is supplied by Japanese manufacturers.

An Invicta watch may not be a piece of art, but it’s still an appealing timepiece both in terms of appearance and features.

Just keep in mind that price and quality are usually closely related. This does not apply in all cases, but it is a good rule of thumb to remember.

Expensive brand watches are expensive not only because better materials have been used or because more care has been taken during the assembling process, but also because these watches do not leave the factory until they have undergone a very extensive quality control.

Invicta has saved on these elements and in practice this means that, for example, any newly produced Rolex watch will most likely last for decades, whereas a larger proportion of newly produced Invicta watches have a much higher risk of breaking during the warranty period.

In other words: Statistically, there is a greater risk of buying a watch that will malfunction within a short time if you buy a cheap watch than if you buy an expensive branded watch.

That goes for Invicta as well as for any other inexpensive watch brand on the market.

That being said, if Fortuna decides to be on your side(!), there are tons of great-looking Invicta watches on sale for less than $100 on Amazon or DiscountWatchStore and while you may not acquire a handmade collector’s item (in fact, you don’t!), you do actually get a lot for the money.

A diving watch resistant to 200 m for less than $50 is almost unheard of, but with Invicta, this is actually possible. Remarkable.

So if you are on a limited budget, Invicta is a great brand to take into consideration and an option that certainly deserves better than to just be ruled out in advance.

Personally I would not go for a model under $100 as you must expect build quality and durability to be stressed to the limit at this price level.

Instead, go for a price range that guarantees a certain quality level and not least, justifies the shipping cost of $30 in case you need to have the watch sent in for service.

What Is a Rally Watch Strap?